I might have neglected my blog for more than 2 weeks, but I had things at work that required my full attention. After all, work is what pays my bills and is therefore my first priority. Since I’m talking about work, let me mention that my company, Procter & Gamble (P&G) is one which supports sports through its cooperation with the International Olympic Committee and the great support to mothers of Olympians. This in itself is an exciting topic I will write about in future posts, especially as P&G is known for its leadership in marketing approaches and it could serve as a role model for Arab companies to potentially learn from and initiate a program to support Arab athletes and Olympians.
What I actually wanted to report about this time is the race I did last Saturday which was kind of an OD race (Olympic distance). I say ‘kind of’ because it was 1.5km swim, 46km bike (instead of the official 40k), and a 10k run which I think was only 9-9.5k in reality. The race took place in Clausthal where my mother and my sister and her family live. It is also the city I spent most of my summer holidays in when I was living and growing up in Kuwait (my birth place). It is also where I went to University for my Mechanical Engineering studies. Clausthal is in the Harz Mountains in Germany, about 70 km south of the better known Hannover, the capital of the federal state of Lower Saxony. The hilly nature of the area makes the triathlon race demanding and exciting at the same time. The bike part has an elevation change of 800m. I finished the race in 3h:10min which is better than I expected. So, I was very satisfied, even though it is not a good time compared to many of the other participants. I don’t compare myself much to others except for one reason which is gathering data that helps me to identify my opportunity areas so that I can improve next time. So, although I’m relatively slow in all 3 sports, when I compare my swim time with those who were around my position in the results list, I find that I did better than most of them. I was not even trying to be fast, but rather preserving energy by drafting behind other swimmers. The bike is the opposite picture, as I lost significantly compared to others around my position. I attribute this to my weight, which I have to reduce in the next weeks and months. Excess weight has a significant impact on hilly courses. Try to carry a backpack filled with 5-10 kg and ride a few hills …. this is how I felt. The run was good with nothing really worth mentioning except that my time was short enough for me to doubt it was actually a 10k, but rather 9k or maximum 9.5k.
This is the 3rd year I participate in this race in Clausthal. In the first 2 years they didn’t offer an OD but only a sprint. I like racing in Clausthal for various reasons, one of them is the beautiful nature of the Harz Mountains, which is in my view one of the most beautiful areas in Germany. The other reason is that many of my family live there and come to watch and cheer me, like my sister with her husband and 2 daughters, and my brother who comes from Hannover where he owns and manages a hotel. This year, it so happened that a Kuwaiti friend, Abu Mohammad, was visiting and joined my brother coming from Hannover. Both of them were cheering me so loud during the swim. When I got close, every time I raised my head to the right side where they were standing, I heard them clearly calling my name.
This is it for now, except one topic I wanted to mention, but will leave for the next time. It’s about beetroot. Stay tuned to read about it soon. 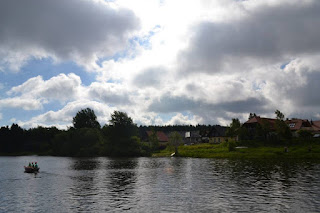