I finished reading Chris McCormack’s book „I’m here to win“ (in fact, I listened to it as an audio book). I can’t say it was the best book ever, but I found some helpful pieces of information in it as you would find in any book. The one thing I’d like to talk about in this post is the amount of training such an exceptional triathlete did at the beginning of his career and leading up to his 2 Kona Ironman world champion titles in 2007 and 2010.
Let me start with the numbers which I translated from miles to kilometers: 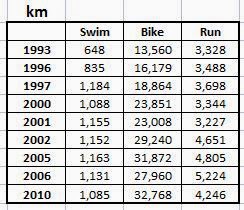 The training volume for the years missing in the table was not mentioned in the book. For better visualization, I created this chart: 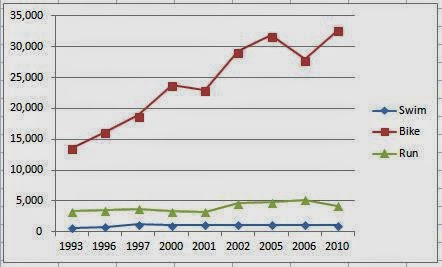 I will not start with the first noticeable thing, i.e. the increase in bike mileage, but rather chronologically to try to understand the progress.
1997 was the year of the first ITU Olympic distance world title. Besides the steady increase in bike mileage over the previous years, it is noticeable that there was an increase in swim volume exactly in that year. Due to the scale of the chart, this is better to be seen in the table which shows an increase by more than 40% versus 1996. This reflects the importance of a strong swim in the draft-legal Olympic distance. Being in the lead pack as the bike leg begins is crucial.
2002 was the year in which McCormack started to seriously race the Ironman distance and did his first attempt in Kona after having won Ironman Australia. In that year, McCormack’s bike volume continued to increase (27%), but it is noticeable (from the table) that the run mileage had an even bigger jump (44%). Increased run mileage is vital to survive a marathon after the long bike leg and it was sufficient to even win some Ironman races, but not the toughest one in Kona at high temperatures.
Finally, the key to winning Kona was, not even more run volume, but rather an increase in bike volume such that Chris’ legs were still relatively fresh after 180 km of biking and ready for a fast marathon.
What I would have been interested in is the amount of hours Chris trained, but this was not mentioned in the book. So, I estimated it. I divided the training kilometers by the average speed that I guessed Chris might have had in average. This was 3.5 km/h for the swim, 33 km/h on the bike, and 14 km/h running. I hope I’m not too far off with these numbers, but I have no clue (for sure my numbers would have been much lower). With these speeds as an estimate, this table shows the number of hours of training in each discipline and the total per week: 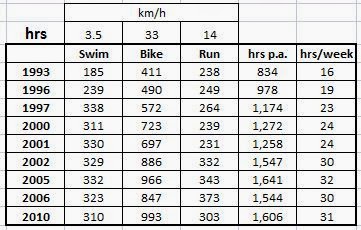 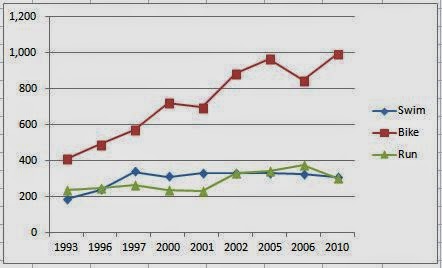 The numbers and curves underline my above mentioned conclusions. The additional piece of information I read is the total number of training hours per week which had to increase to 23 in 1997 before a significant win at the Olympic distance could be achieved, and then another increase to above 30 hours with the start of Ironman racing at top level.


So, how many hours a week do you average at? And, what is your goal?
Eingestellt von arab3athlete um 10:55 PM No comments: