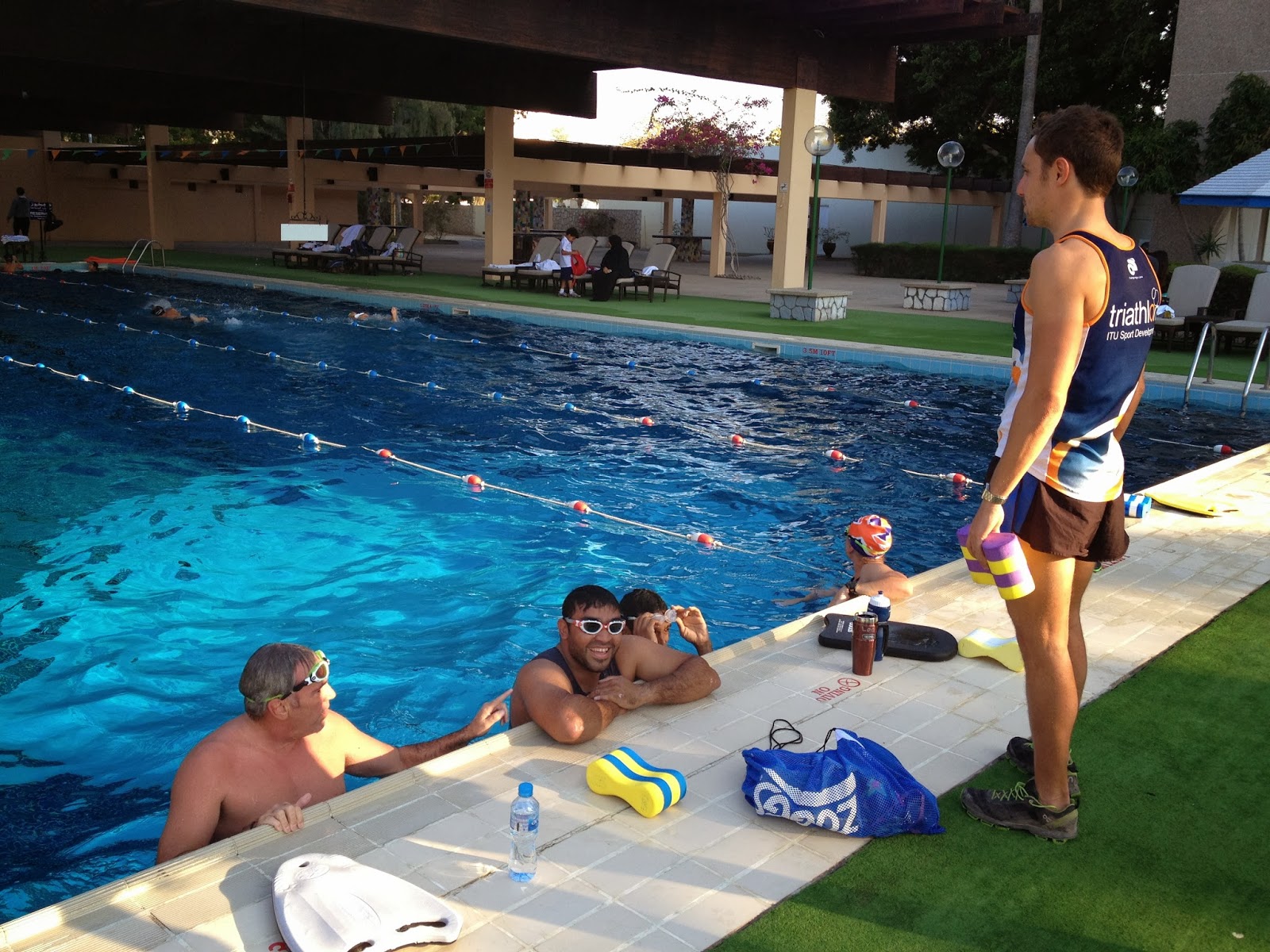 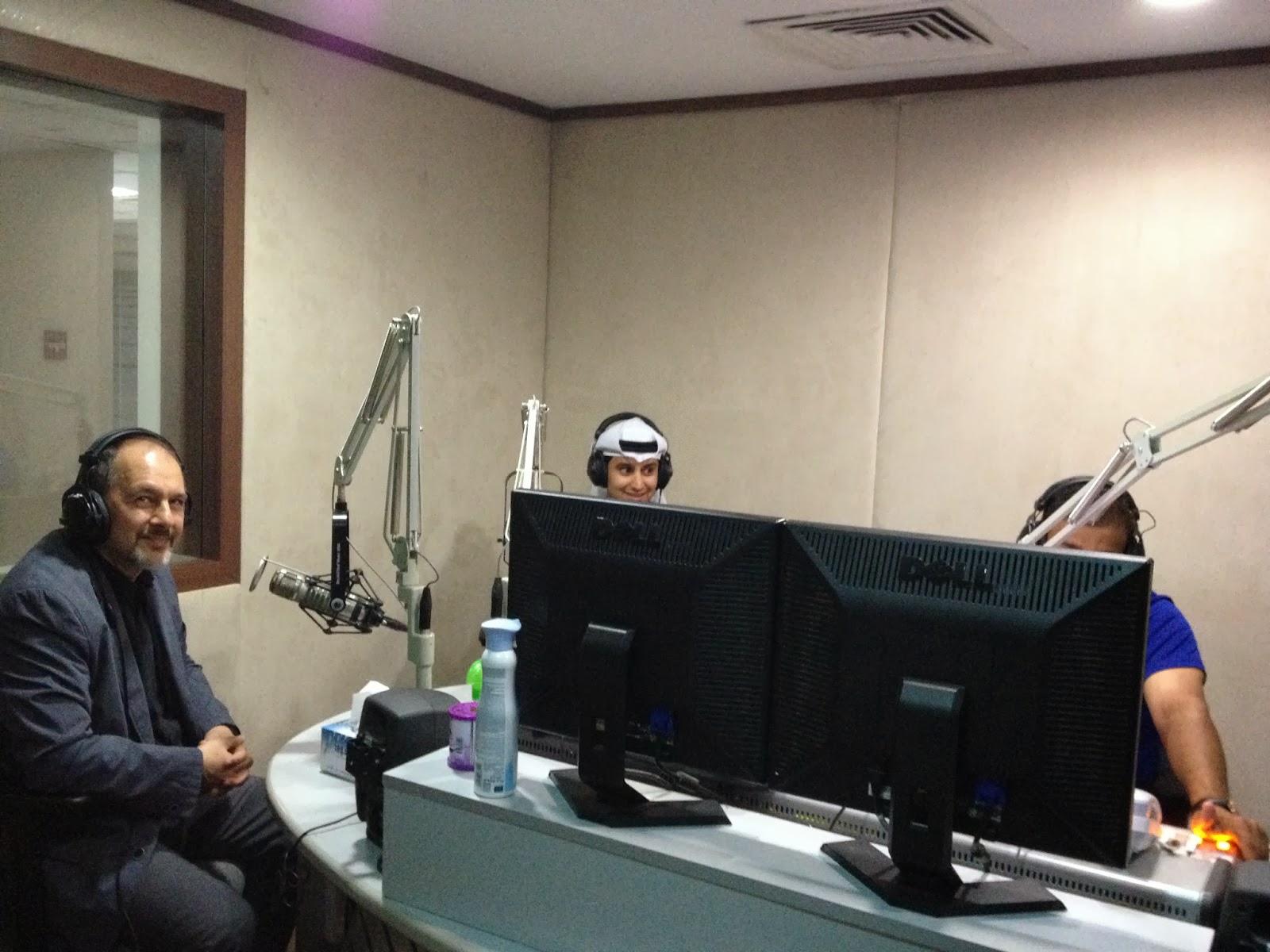 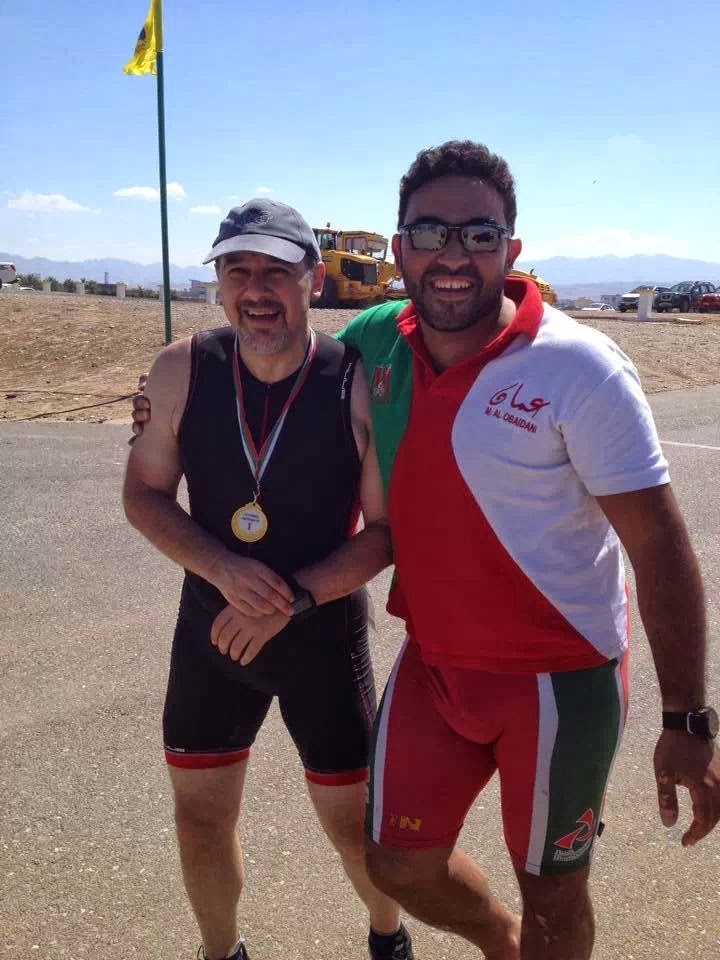 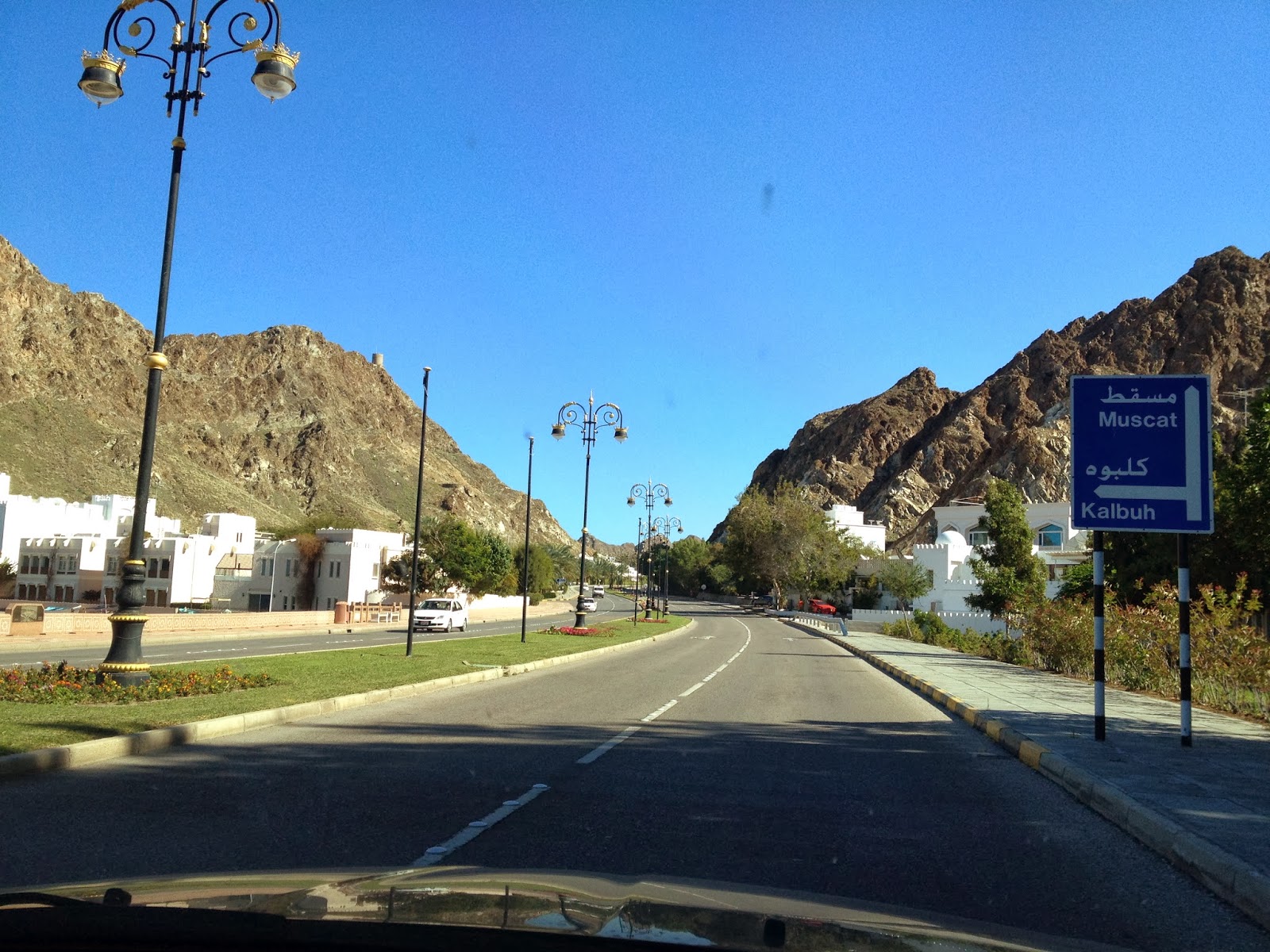 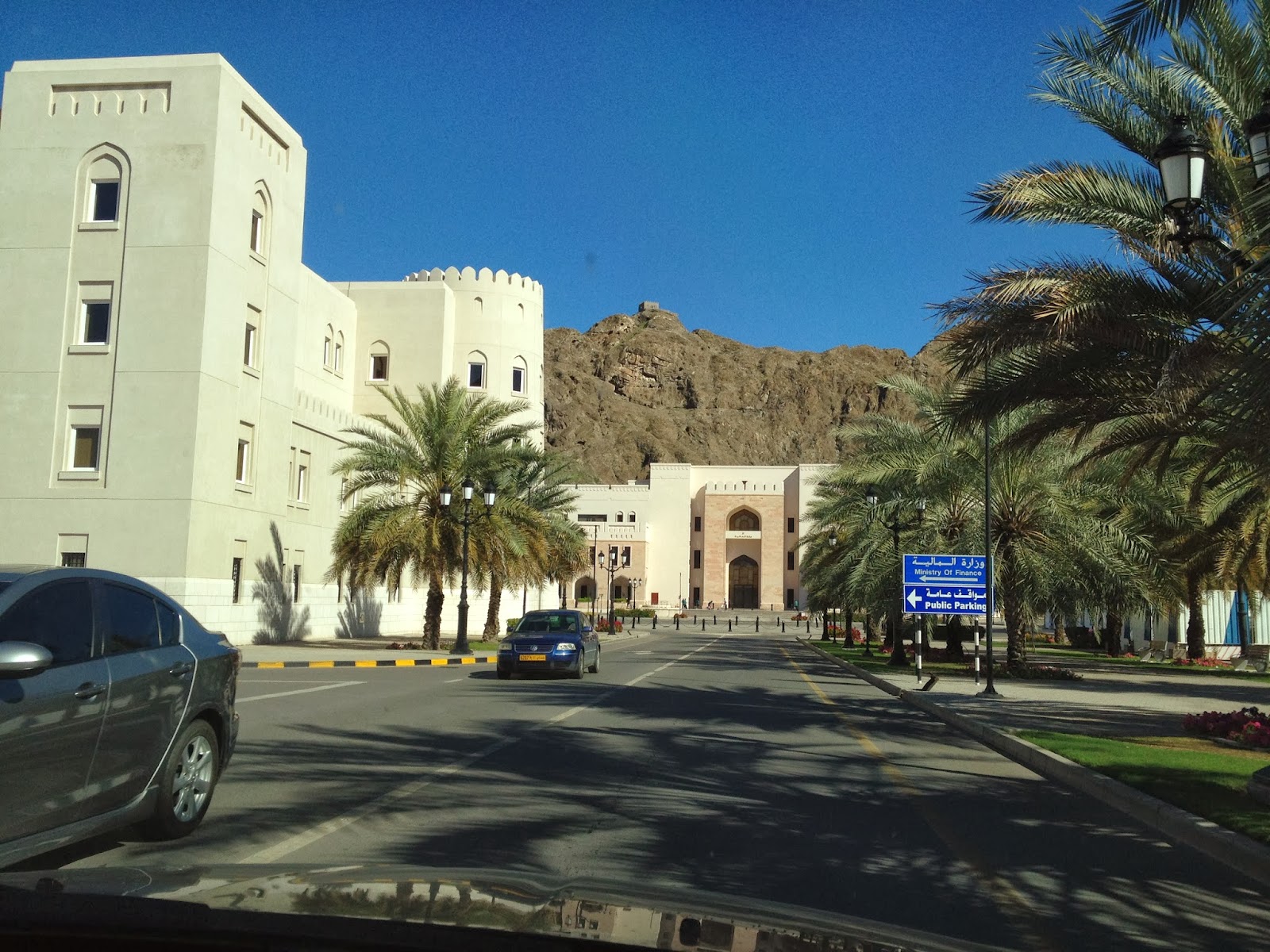 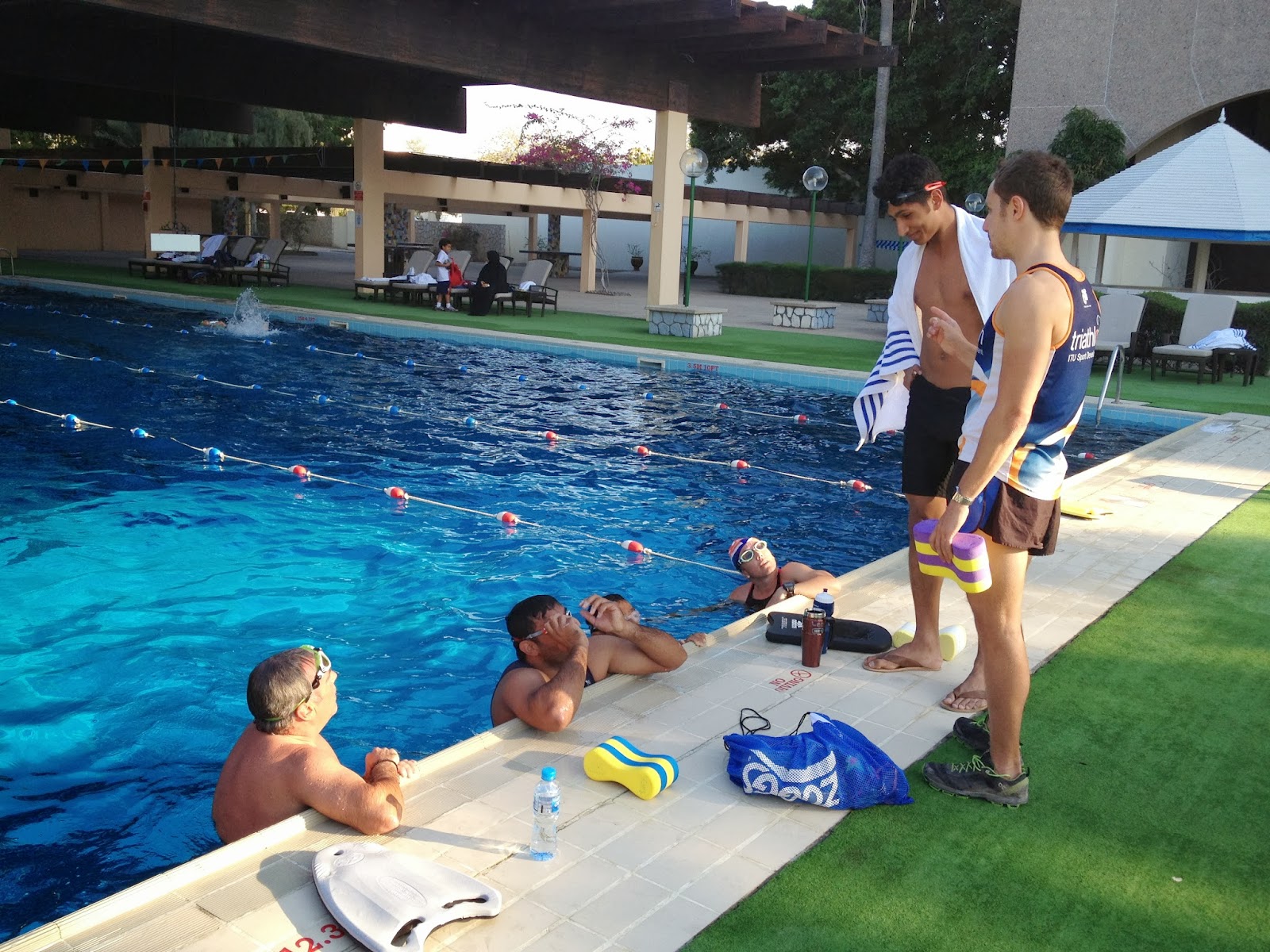 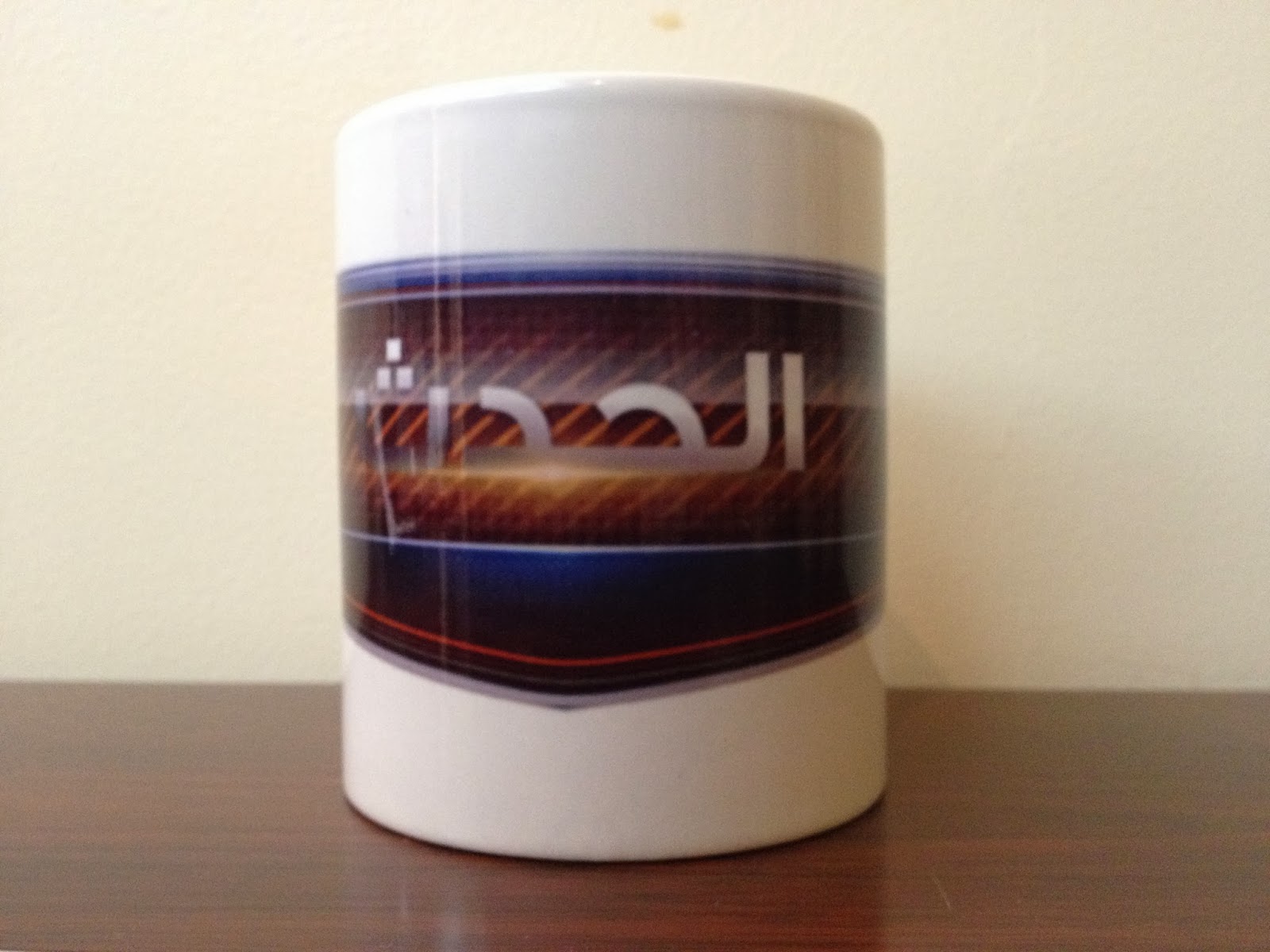 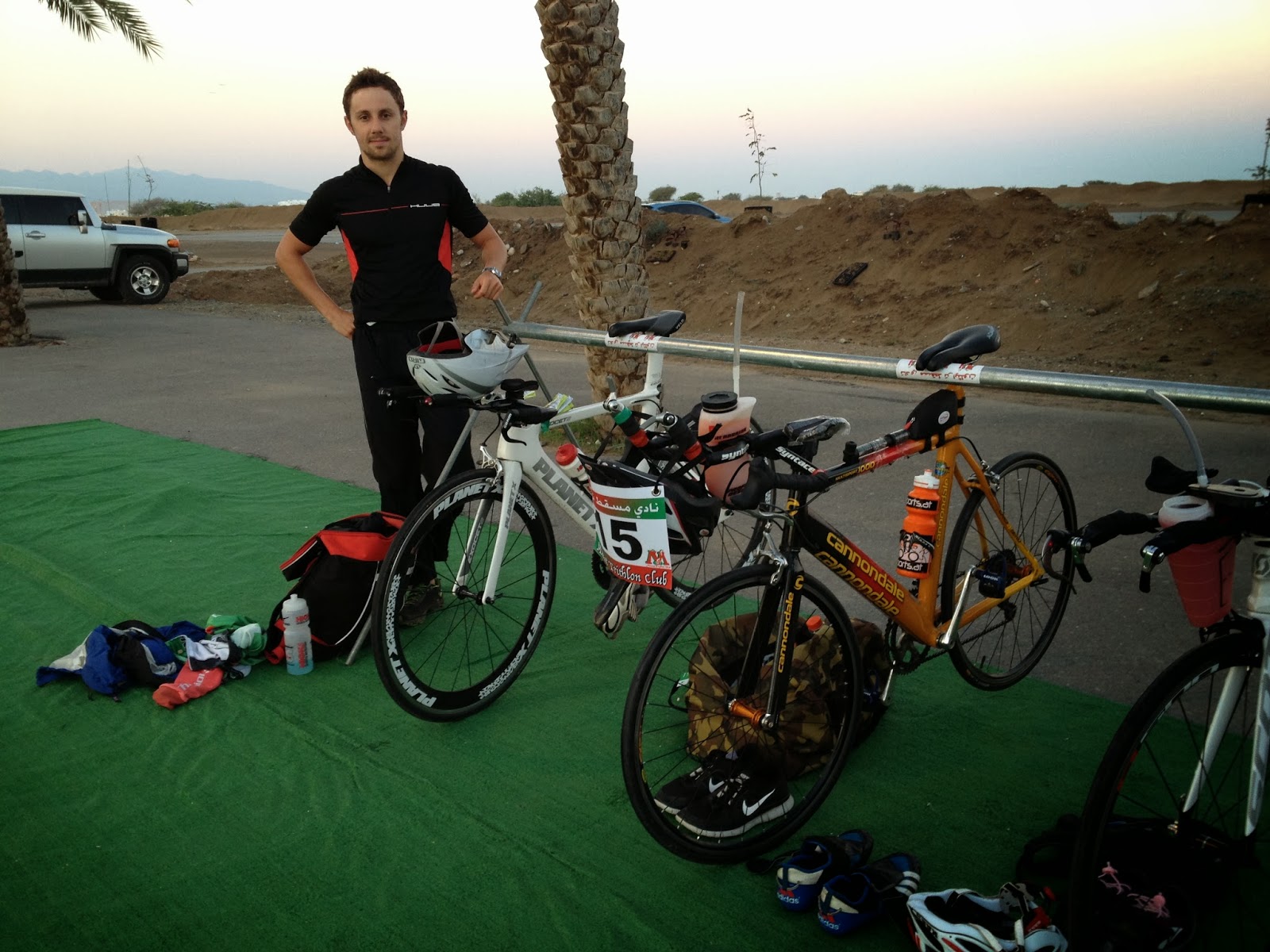 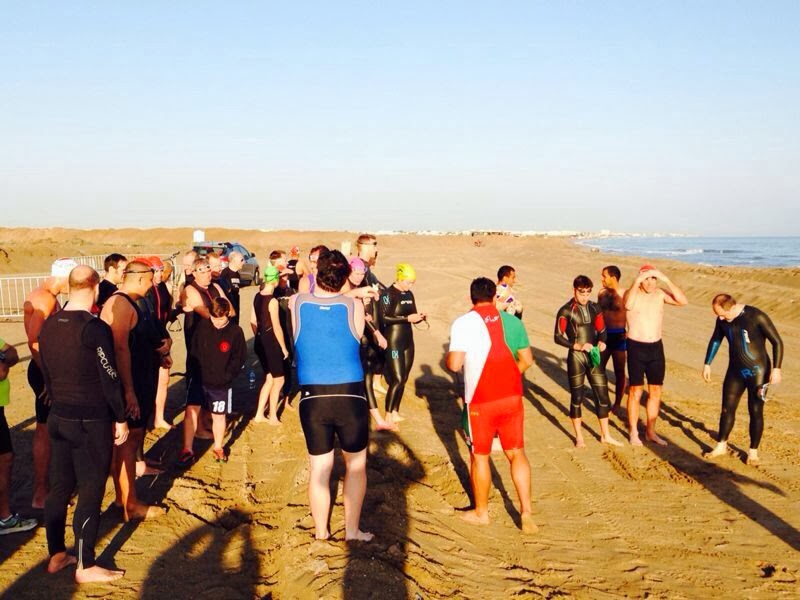 Thursday 13th, February 2014 / 16:05 Written by Oman Observer
in LATEST NEWS
Share on facebookShare on twitterShare on emailShare on pinterest_shareMore Sharing Services0
In all, 40 participants will compete at the Triathlon to be held at Seeb Beach, the venue of Muscat Festival sports events. The long distance participants will be covering 1.9 km of swimming, 80 km of biking and running for 14 km.  Short distance race will have athletes covering 750 meters of swimming, biking of 20 km and running of 5 km.
Lawrence Fanous, the Arab triathlon champion will participate in the event.
Fanous has also been holding a training camp for beginners and professionals. He is trying to raise awareness for the sport of triathlon in the Middle East as it is an ideal sport to encourage living a healthy lifestyle. “If people are afraid of joining the rest of the training camp or the race on Friday, they should just come and watch and I’m sure they’ll be taken by the excitement of the athletes,” said Fanous.
For Fanous, Muscat Triathlon is the first event for 2014 as he will be at the Arab Championship in March and Asian Games in September.  Fanous’ ultimate goal is to qualify for the summer Olympics in 2016 in Rio de Janeiro.
The organizers said they are keen to see young people join, but they have people over the age of 50 racing as well.  “No one is too old to start with this sport, or any sport for that matter.  I am one of them,” said Tarek Badawi, from Germany who is also competing at the event.

Today's plan for the training camp were focused on the run, which was planned for the afternoon. So, I left my room and walked for a few meters to arrive at the sea. I swam for 30 minutes, going out and back for a few times.When I got a bit too far from the shore the last time, I had a strange feeling and started worrying about sharks. I knew there were no sharks in the area, but I thought there is always a first time for everything and I didn't want to land on the front page of an Omani newspaper being the first ever victim of a shark attack. So, I swam back and returned to my room. They say a swimmer needs to develop "feel for the water". I never understood what that meant, but now after having swum in the sea twice within a few days, I know what it feels not to have feel for the water. I call this a good start. Also, I was wondering if one needs to have any electrolyte drink in a race after swimming in the sea? (I swallowed enough).

Rob came to the run session in the afternoon, as he had done for all other sessions so far. We also met South African Brad from Deloitte and Touche who joined us for the first time. Of course, I was there too as I wouldn't want to miss the opportunity of training with the an expert like Lawrence. Ali Altamimi came at the end and a personal training session with Lawrence. The training was as follows:

After returning to the hotel, we took a shower and left to the Oman festival for Lawrence to have an interview with Lakshmi Kothaneth from Oman FM Radio station. Lakshmi asked Lawrence about himself and the sport of triathlon, and he talked about the training camp and the upcoming race on Friday. I was impressed by the professionalism of Lakshmi. She was very calm, talking to us only seconds before she was going to be on the air again to talk something else. If it was me, I wouldn't be talking to anybody, trying to collect my thoughts and prepare for what I need to say when I'm on the air again. And that's why I don't have a radio career.

We walked around the festival area, took pictures, watched traditional activities and dances, and ate local specialties. Then we went to a restaurant to have some Shawerma and Falafel with Mohammad Al-Obaidani and Ali Altamimi. I actually wanted to use the training camp week in Oman as an opportunity to lose weight, but my plans were destroyed that evening as I couldn't resist the yummy food. And that's how our 3rd day ended. 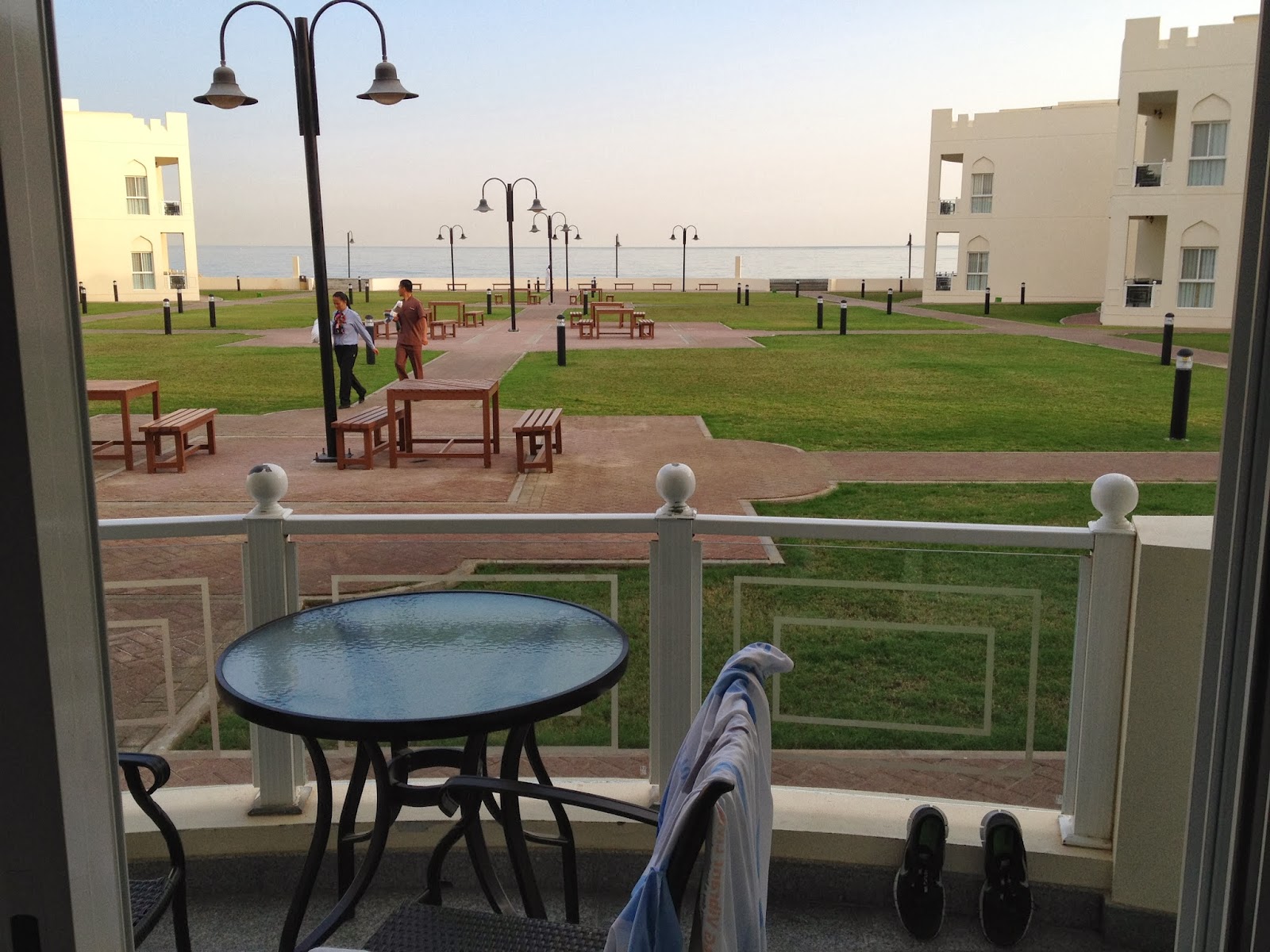 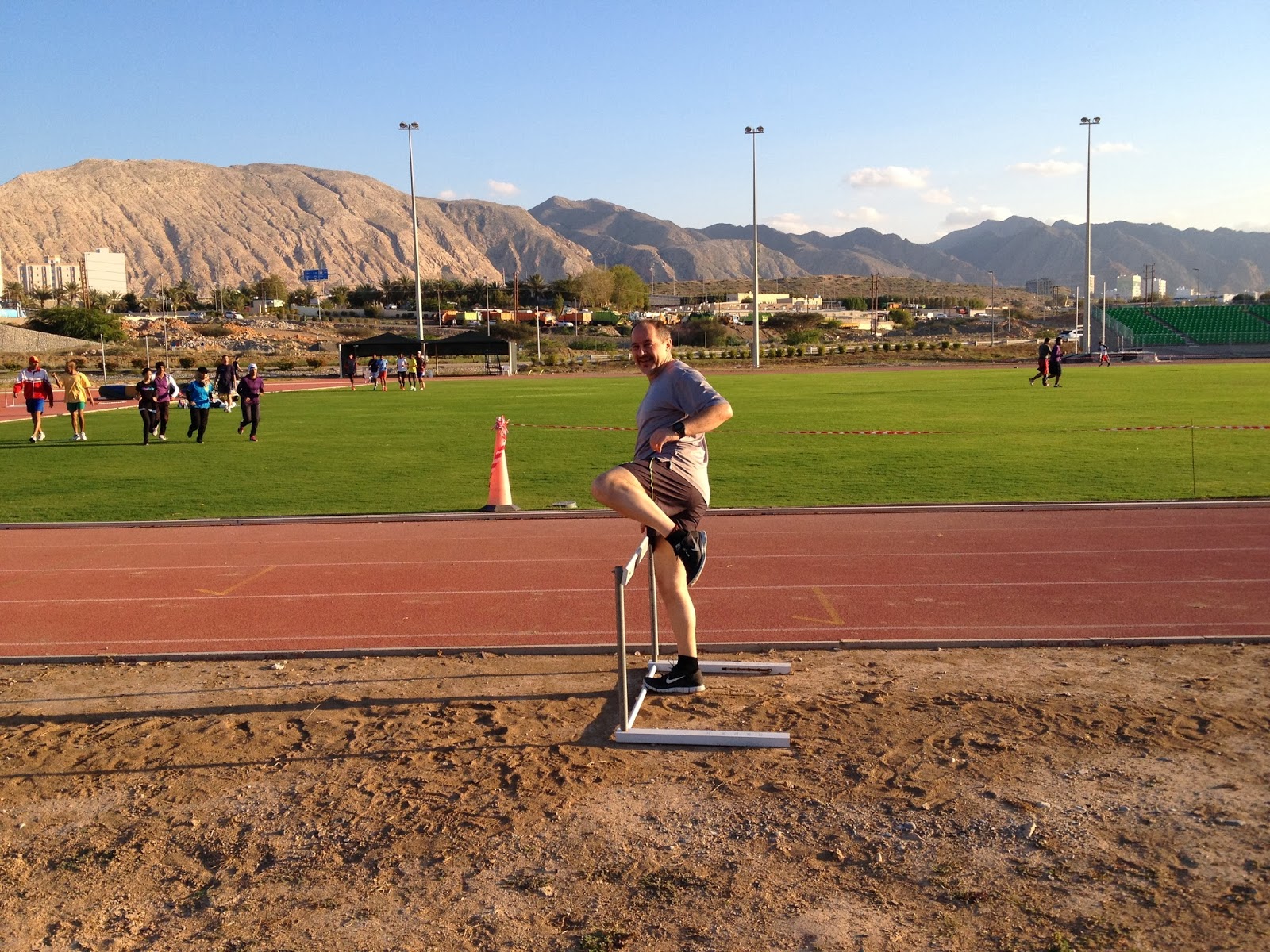 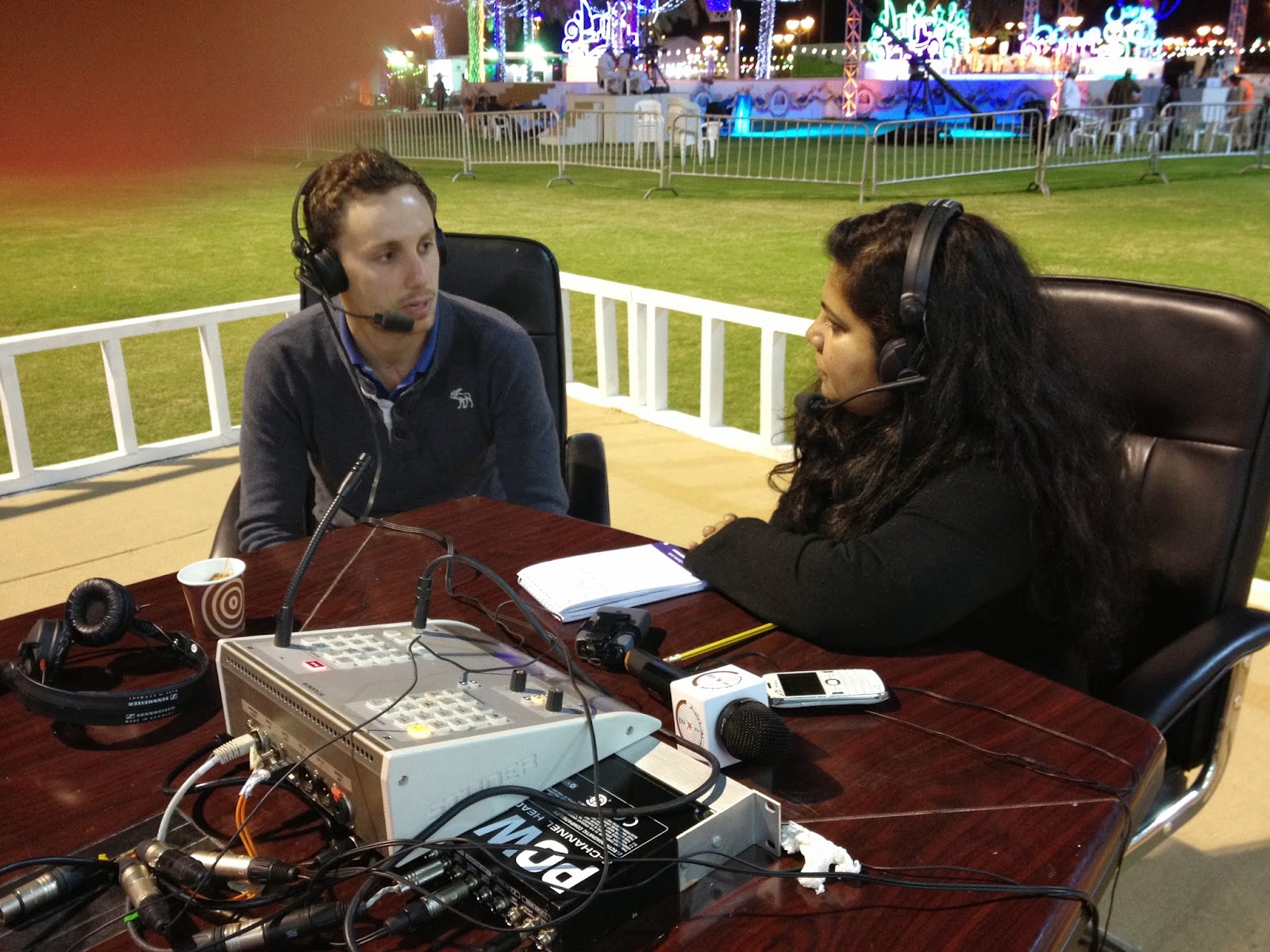 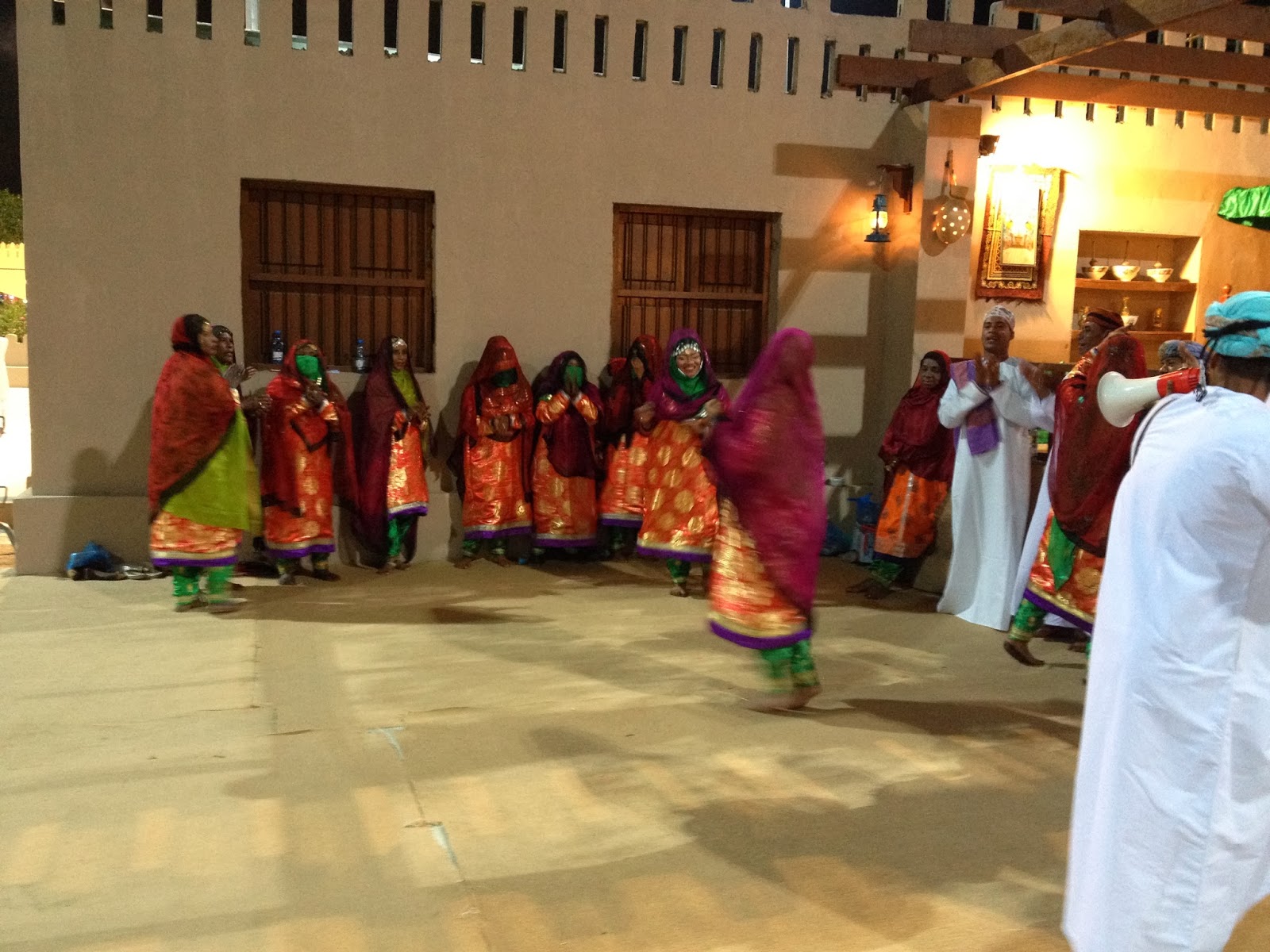 I left at about 8 in the morning by car with Mohammad Al Obaidani to escort Lawrence while he was riding his bike for about 2 hours. His ride included a mountain climb on the road to Amirat. After he finished the ride, we met at a café near the Intercontinental hotel. Lawrence waited for us there while Mohammad and I went for a 30-minute short run. We returned by car to the hotel after that while Lawrence rode back on the bike.

At 2 pm we met again on the beach behind the Intercontinental to start the second session of the training camp. This session focused on open water skills, such as running from the beach to and in the water until it is deep enough for a few duck dives only to start swimming when it is sufficiently deep to do so. We also practiced swimming straight taking the waves into consideration. We closed our eyes for 20 strokes to see which direction we have the tendency to swim to so that we try to correct that. We swam a few times around the buoy as well. We finished the session in 55 minutes. It was only 4 of us, Lawrence as our coach, Mohammad, Rob, and I. So, we enjoyed an almost exclusive personal training by an excellent trainer.

As soon as we exited the water and were walking towards the car, it started raining heavily. So, we went to the Second Cup café, washed our feet in the toilette with water and had a warm drink. I should mention that the weather, except for the 15 minutes of rain, is perfect for outdoor exercise. The temperature is 24 deg. C in the middle of the day, and it is not much cooler in the morning and evening. I don’t know the water temperature, but it felt warm and close to the air temperature, i.e. 24 degrees as well.

On the way back to the hotel we dropped Lawrence off to continue running for an hour to the hotel, while I continued by car and ran for 30 minutes after arriving there.

At 8:30 pm, Mohammad and his friend Khaled Al-Farsi came to my hotel room and brought grilled fish, rice and salad with them and we had a very tasty dinner. Lawrence and I missed spoons or forks at the beginning, so we had to use our hands. Mohammad was surprised about me and asked if I had forgotten how to eat by hand. The truth is, I can eat anything by hand, but I have never even learned to eat rice by hand. I always say that Europeans use 3 of their 5 senses when eating; they see the food, smell it and taste it. Arabs use all of their 5 senses as we touch and feel the food in our hands and hear ourselves chewing and enjoying it – a comprehensive sensation.

Khaled told us stories about the time when he lived and studied in England, and the day ended with a very entertaining evening with people I felt I have known for a long time. 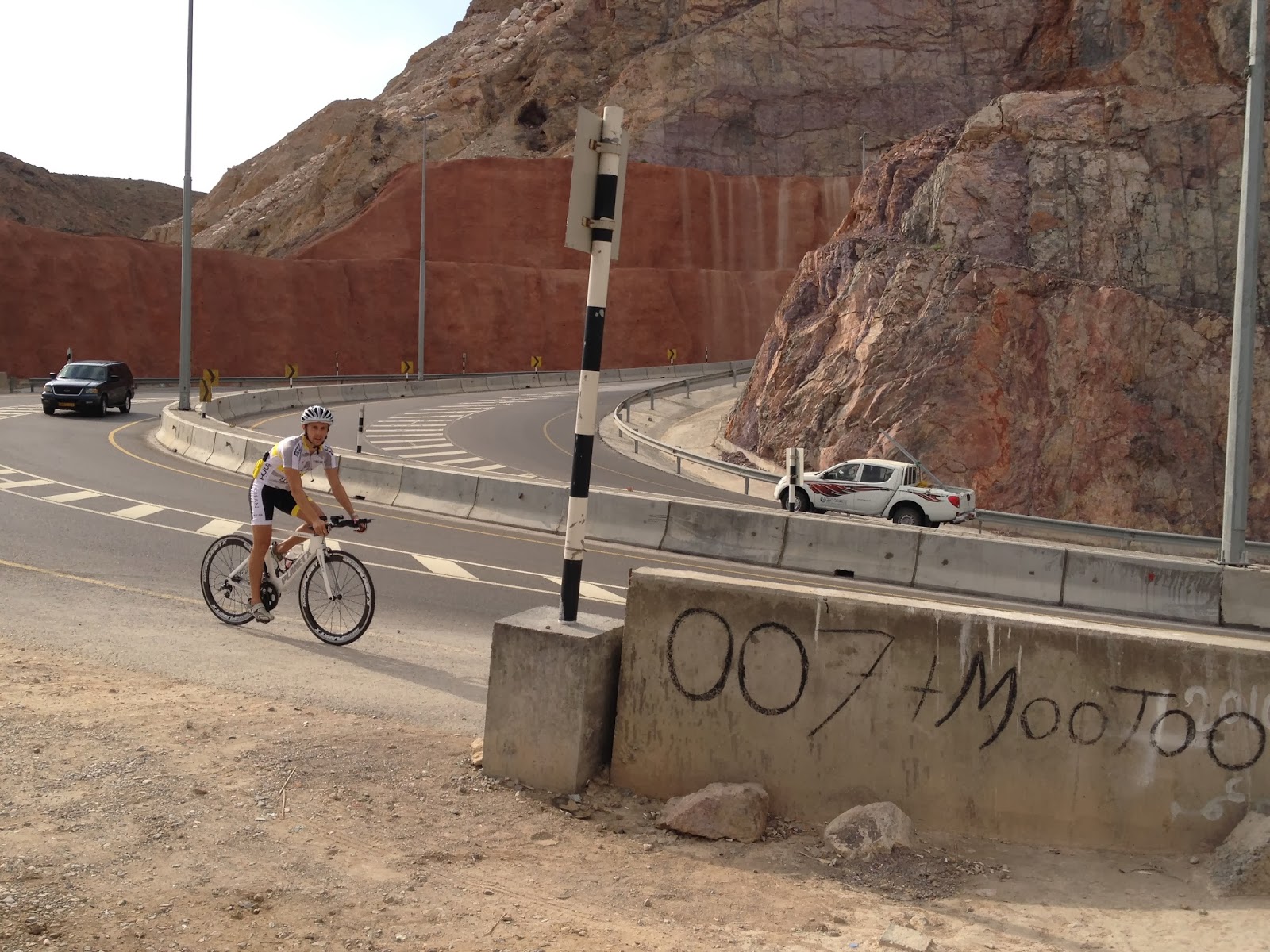 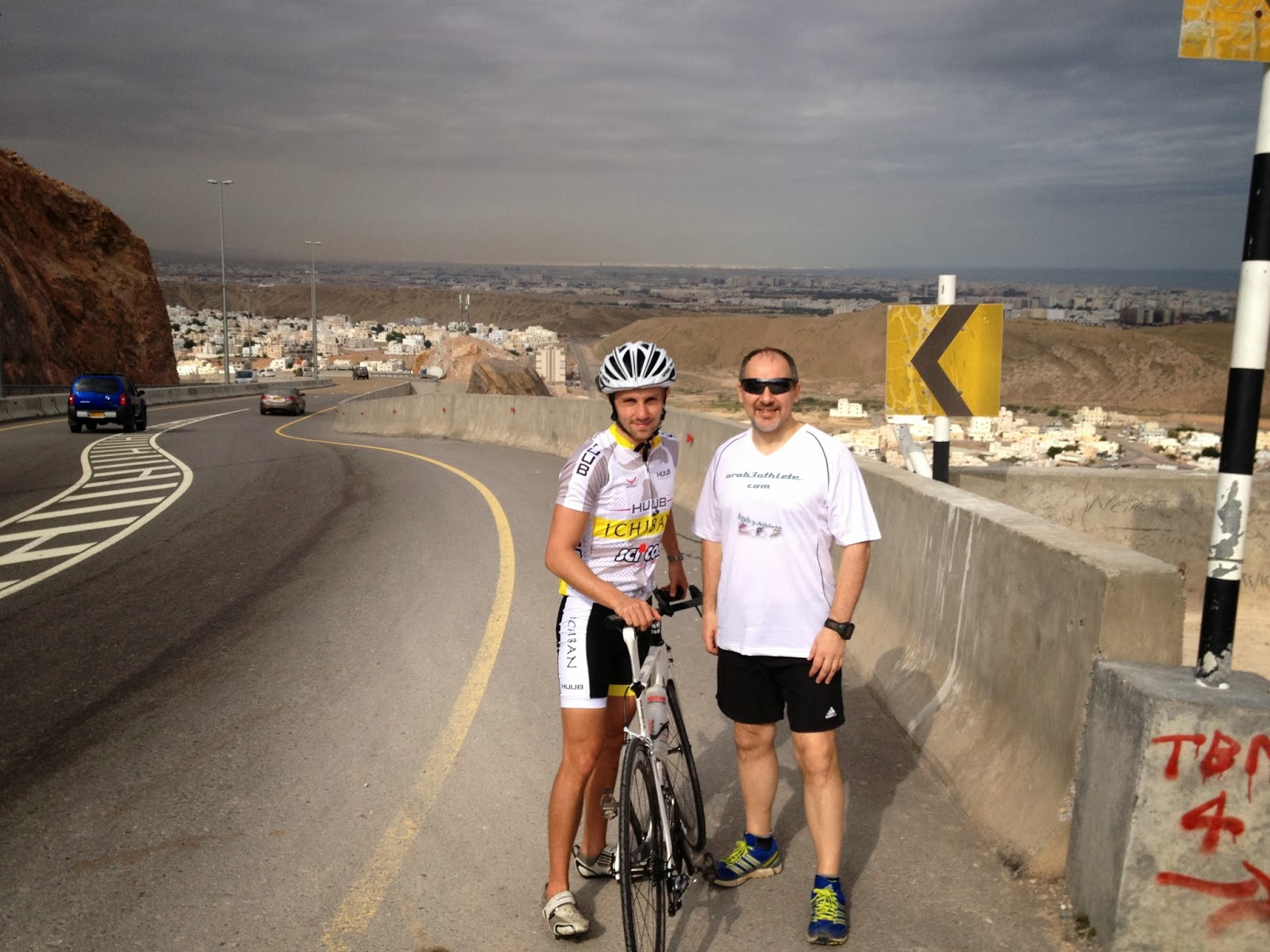 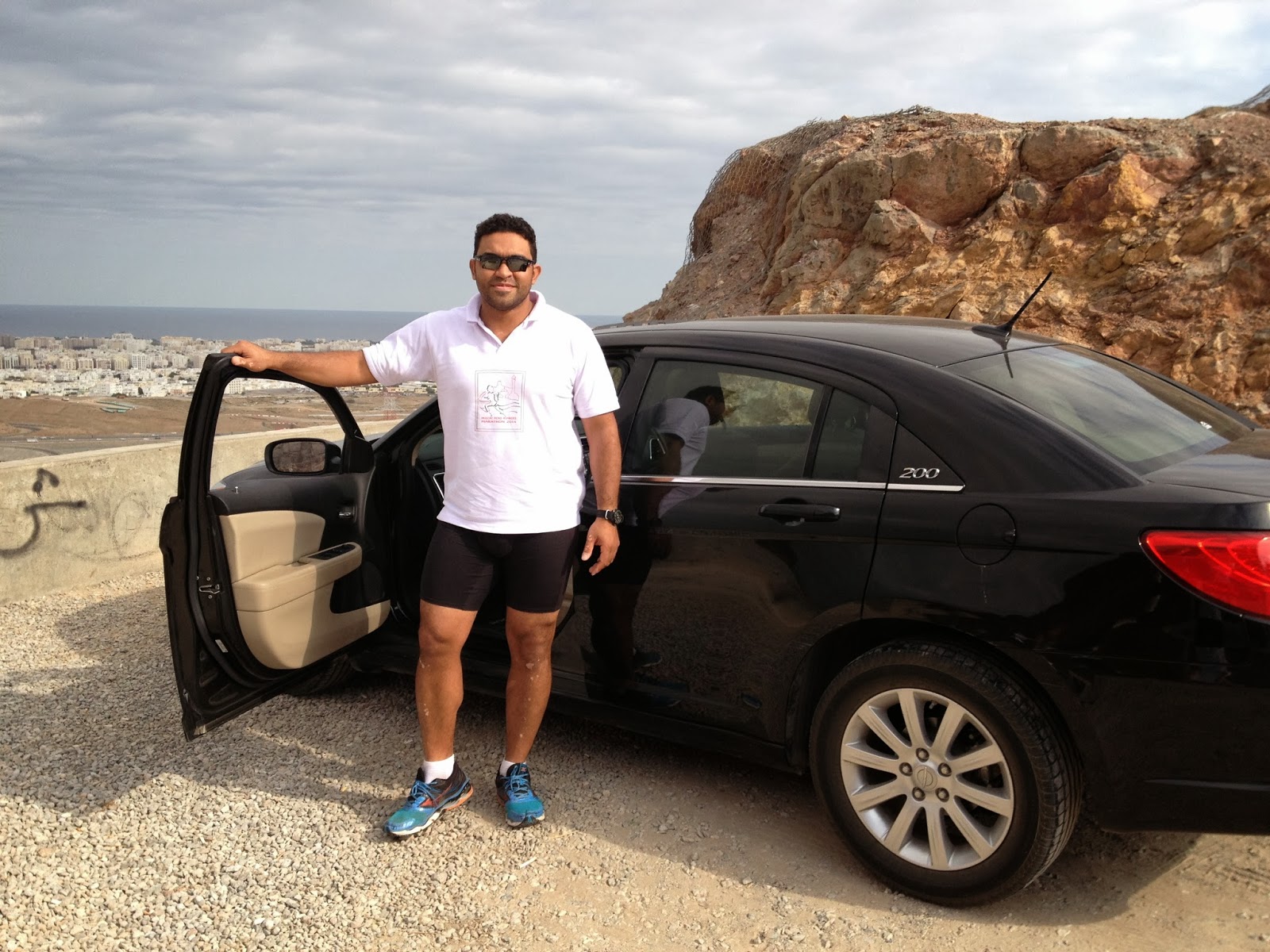 Oman trip - day 1 - 8th February
I was worried at Frankfurt airport. My wife had accompanied me to alleviate my worry. I’m not used to traveling with a huge bike case and didn’t know if Oman Air was ready to deal with a case of this size. But, everything went fine. We took off around 9:30 pm and landed at 7 am local time on the following day. I didn’t sleep more than an hour at max, but I didn’t feel tired due to the excitement with all the new things I was going to experience.
Mohammad Al Obaidani, the executive Director of Muscat Triathlon Club was waiting for me at the airport, accompanied by Ali, a 22-year young man. We put the bike case in Ali’s SUV and went back to wait for Lawrence. Lawrence’s airplane landed at 8 am, but it took more than an hour for him to pass through visa and immigration. After putting his bike in Ali’s car, we drove with Mohammad to the hotel. As we were there before 12pm, we had to wait for a while and used the time to assemble our bikes outside on the grass.
At 2 pm, we met with a few athletes to start the first round of the training camp, which we had organized with Mohammad’s help and under the coaching of Lawrence. Besides Lawrence, Mohammad and me, there was Ahmad Al-Falahi, a strong Omani triathlete, and Rob (53) from Great Britain who has been living and working in Oman since 2009 and had only started with triathlon about a year ago. We started our bike ride.
We rode from the Intercontinental hotel to the 18th of November Street parallel to the coastline for 45 km in 1.5 hours. Time passed very quickly. Ali escorted us by car to help whenever we needed anything, but the only one who actually needed help was me as I dropped my water bottle first and then the pump fell out of the back pocket of my shirt. This was right at the beginning; from then on I caused no more trouble. We intended to run for 30 minutes immediately after the ride to practice transitioning and running with tired legs. However, Ali had some of our running gear in his car and he has apparently decided to go and fill up the gas tank first. So, we had to wait which took the intended effect away, but we did complete our run a short while later.
With this, the first day was over and we returned to the hotel. Lawrence and I had dinner in my room and talked about various topics before going to bed early as we were very tired. 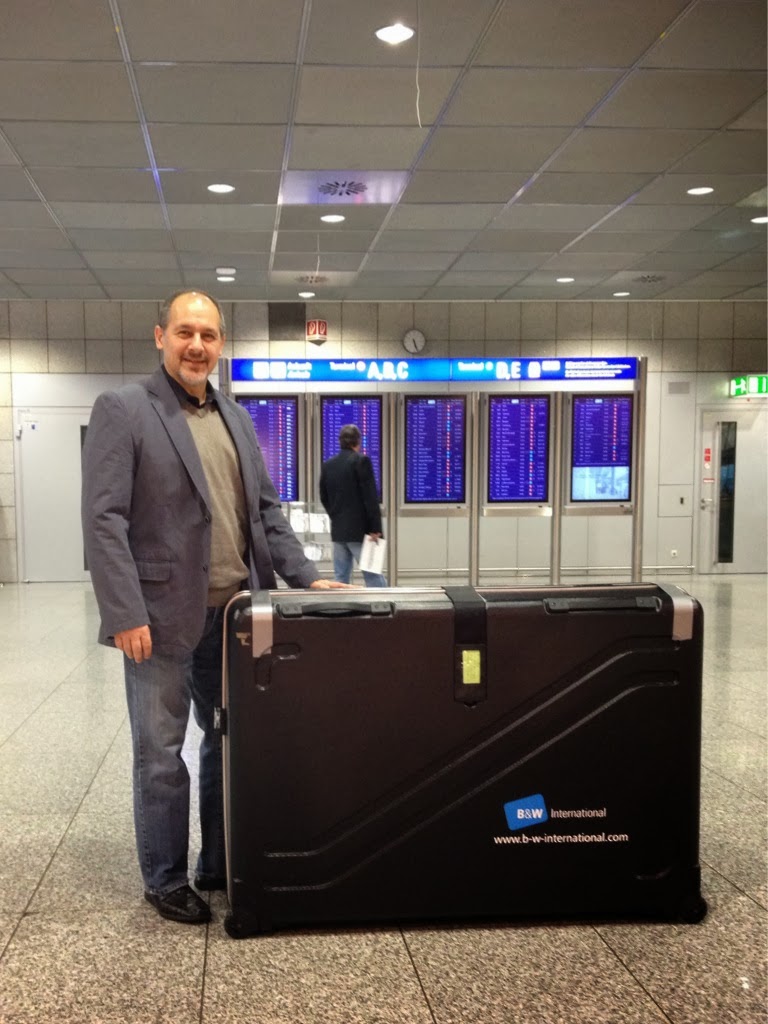 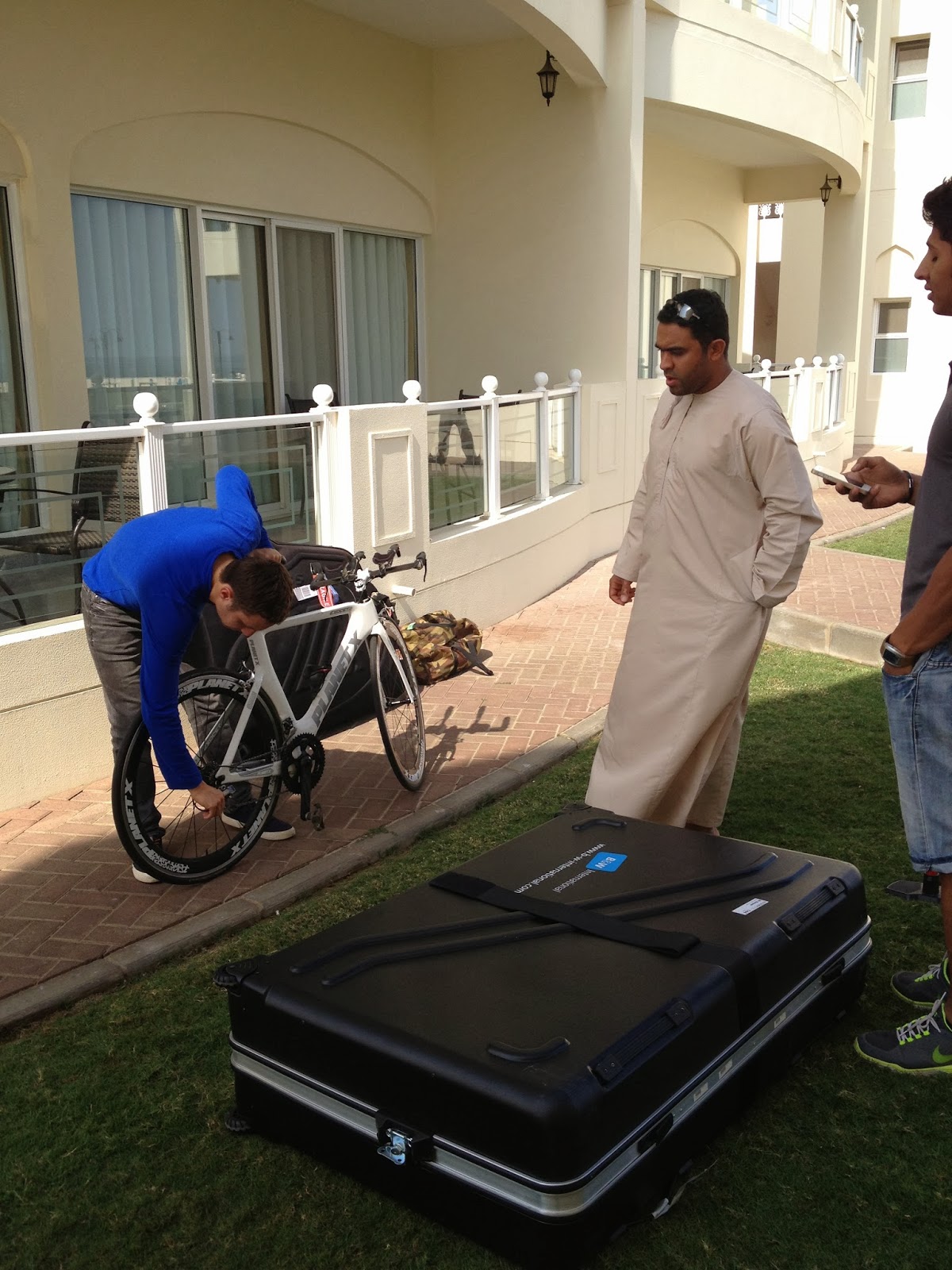 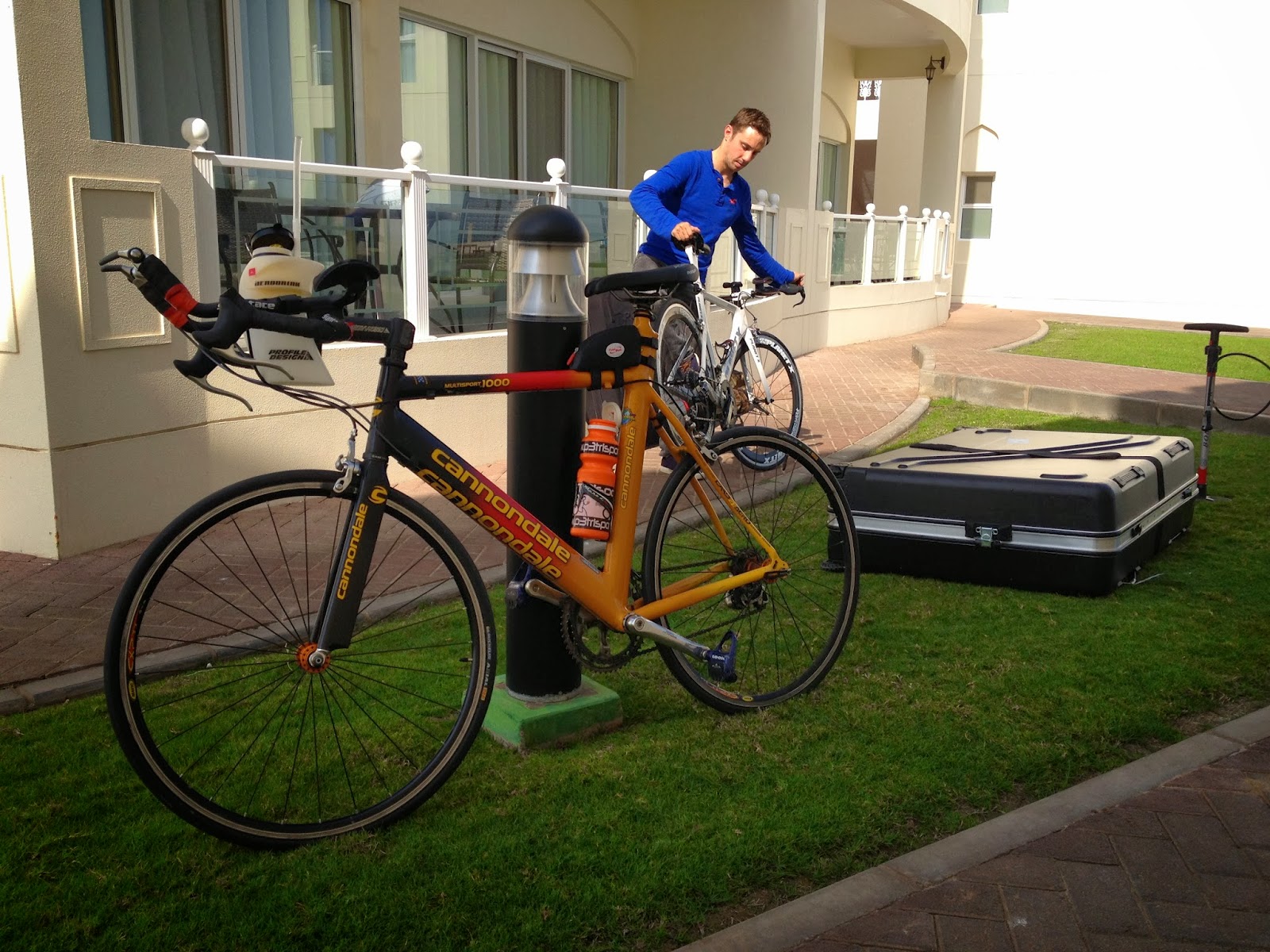 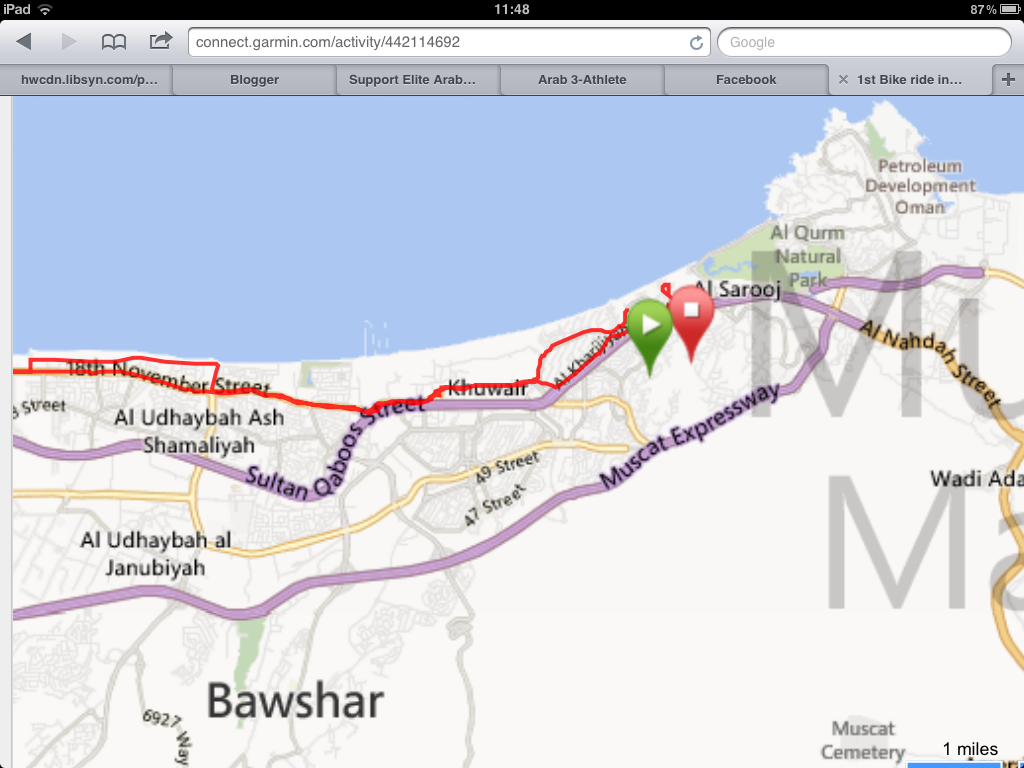