Yes, that's true. Olympic Gold medalist Alistair Brownlee finished one place behind Jordanian triathlete Lawrence of Arabia at the ITU World Championship finals in London. It was one of the most exciting events I have ever witnessed.

But, let me start at the beginning. I flew to London very early in the morning of Sunday, September 15th. My plane landed in London Heathrow at 7:25 am local time and I took the tube, Piccadilly line, immediately to Hyde Park corner arriving before 9 am. The Elite men's race was only going to start at 1:30 pm, but I wanted to be there early enough to meet some of the Egyptian triathletes who I knew had travelled from Egypt to participate. Most of them had already raced in the days before, but some were participating in the age group Olympic distance race on that day. I was particularly looking forward to meet fellow blogger and triathlete Hassan Afifi who lives in London and whose race I knew was starting at 10:10 am.

I couldn't manage to see Hassan at the start. The first time I spotted him was at the entrance to the bike transition zone when he opened the zipper of his wetsuit and I could read his name on the tri suit. Until then, I had only met and communicated with him on facebook, twitter, and through our blogs. At the transition zone after T1 I also met part of the Egyptian group, chatted with them a bit and took a couple of photos with them. The second time I saw Hassan was at the end of the bike leg. The run course consisted of 3 rounds and I could see him and cheer him on twice every round and took some pictures. I also saw 2 other Egyptians running and cheered them on. I hope it helped a little bit. I know I always appreciate all the encouragement I receive when I'm racing.

Just before the end of Hassan's race, I hurried towards the start line to try to find Lawrence, and sure enough I saw him warming up and called him loud as he was passing by. Lawrence stopped to greet me, but I didn't want to interrupt his preparations and asked him to go ahead doing what he needed to do. Then I went to the entrance of the grandstand. I had been there earlier to buy a ticket but was told that the tickets were sold out, which wasn't really a surprise to me. So when I returned, I was just going to try my luck and see if I could get in somehow. I waited so long watching people enter and started doubting that I will be able to get in. I was thinking of leaving and trying to find a good place along the bike or run course, but then a guy who was entering with 2 kids looked at me for a few seconds and seemed to be thinking. Then he asked: "do you need a ticket?" In that moment, I was the happiest person on Earth.

I took a seat in the grandstand and watched a dramatic race unfold. The swim must have been tough because at some point the field was stretched to one long chain of swimmers, each one trying to keep up with the one in front of him. I knew Lawrence is a strong swimmer. So, I was concerned to only see him come out of the water very late. I saw later in the results that he was 50th out of the water out of 70 of the world's best triathletes. The bike leg was more dramatic. Three main groups were formed right at the beginning. The first one included the Brownlees and Javier Gomez. Lawrence was in the 3rd group, about 45 seconds behind the leading group. After a few rounds this group caught up with the second group and both got very close to the lead group. At the end, Lawrence had the 5th best bike split, which was pretty amazing and unexpected to me. Following Lawrence's previous races and analyzing his results in detail I was expecting him to be a better swimmer and runner than a biker. At the front, Alistair started a few attacks and was pushing it. Then I heard the announcer talk about a potential foot injury and speculating that Alistair was therefore trying to gain some time. Javier raced smart and didn't let himself get pulled into any ineffective move. Alistair left T2 first and it started to become obvious that something was indeed wrong with his foot. His face expression was clearly showing the pain he was in and he started losing places and falling behind. At some point, it seemed as if his pain disappeared as he started gaining and got back to 5th place before he slowed down again. From there on, he was just trying to survive and somehow get through to the finish line. This left Jonny Brownlee and Javier Gomez alone at the front. They kept testing each other, overtaking each other back and forth until the last kilometer or so when they took off to a sprint. No one in the grandstand was sitting anymore. Up until the last strides Jonny was in the lead, but was overtaken by Javier. When Jonny turned his head to the left looking at Javier passing him, I knew that was it.

I started thinking and had only one question on my mind. Will Lawrence of Arabia beat the Gold medalist, Alistair Brownlee? The big screen at the grandstand was showing Lawrence approch and then arrive at the finish line (51st). Alistair followed about half a minute later (52nd). Yes :-)  But seriously, respect to Alistair Brownlee, one of the best athletes in the history of triathlon, for just enduring the pain to the finish line and all the best wishes for a speedy and complete recovery. And Lawrence of Arabia did extremely well among 70 of the world's best triathletes. Congratulations!!!! I wish he could get more support to enable him to follow a perfect training and racing plan without any compromise whatsoever. Especially the next two and a half years or so will be so important as Lawrence will attempt to qualify for the Olympic games in Rio in 2016.

As I was leaving the grandstand after the race and the following ceremony, I met Hassan and we chatted for a while before we decided to go and grab something to eat. But then we saw Lawrence at the Huub booth (thanks Huub for sponsoring Lawrence). We talked a bit and agreed to go for dinner together, with Lawrence's father Marco, his sister Gina and her friend. A perfect day as far as I was concerned was closed with a perfect dinner at a Lebanese restaurant on Edgeware Road. Thanks Marco for inviting us. Next time I will not let you sneak away from the table to secretly pay the bill again. It was the second time you did it     :-)     Thanks again. 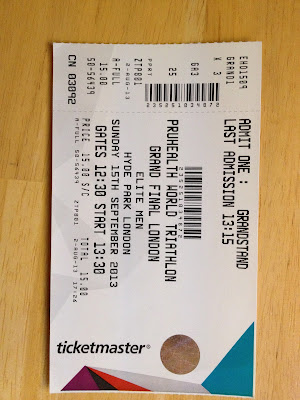